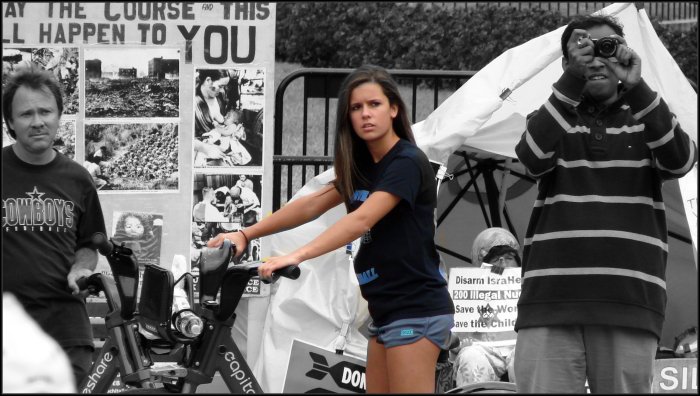 ~ “But Kenneth, I’m simply not attracted to her anymore”

That is what a married man said to me at coffee a few weeks ago. Married for 20 years, two children….the guy was telling me how wonderful his wife is and how much he loves her….except; he’s no longer physically attracted to her.

“Look Kenneth, I’m not saying I want a divorce but she’s put on a ton of weight from when I first met her and she doesn’t seem to have any desire to lose it…..so what should I do?” he asked

I didn’t give him an answer. Its not for me to tell some acquaintance I have only talked with a couple times what I actually think about such an intimate issue in their life…especially when it comes to the subject matter of their spouse. The one thing I did appreciate about what the guy was telling me is that he still really loves his wife and appreciates how much she does for him and their children.

Sadly, it seems like this issue is often only looked at from the guy’s perspective; men rarely seem to realize (or care) that they too have a tendency to ‘let themselves go’ but in different ways;

—) I know many men who loved to go out to coffee with their girlfriends and talk endlessly into the late hours of the night….but after the marriage these men now only grunt when they are hungry and don’t participate in deep conversations

There are a plethora of examples we could consider when it comes to ‘how people let themselves go’ after marriage or after being in a long-term relationship…..but what are the men and women who are in these situations supposed to do?

A good Christian friend of mine often tells me that “looks aren’t everything“; “Inner beauty is where its at Kenneth and all these young people I see who are obsessed over looks are misplacing their energy and ideals” he says.

However, looks must matter to some degree because even in the bible we find an entire story about a woman named Esther who became queen merely based on her looks. So should we be physically attracted to the person we are with; and what happens if we still love the person we are with but they no longer look the way they did when we first met them.

Personally, it seems rather shallow to me that so many men are obsessed with looks. I realize the bible talks quite-a-bit about being attracted to your girlfriend/spouse (see Song of Solomon or book of Esther) but that was thousands of years ago when women were treated like property. Now that we are in the year 2013 shouldn’t we be placing a higher priority on intelligence than looks?

I often wonder if the men who are so obsessed with how their wife or girlfriend looks are merely succumbing to some kind of primitive cave-man attitude. However in a recent study it was found that Men With Attractive Wives Report Higher Levels Of Marital Satisfaction; Now isn’t that crazy? Does that merely point out that men are really shallow….or that men are easily satisfied?

I mean what does it say about all of us men that all it takes is for us to be with a pretty face; and we’ll report higher levels of marital satisfaction? I mean doesn’t this kinda suck? Is being married to a pretty faced…’dumb’ blonde all that men really want in life?

So as I sat there talking with the man at the café all of these various thoughts were running through my mind…what do you say to someone who tells you they are no longer physically attracted to their mate;

—) ‘quit whining and be a good husband?’

—) ‘stop your bellyaching and grow up?’

—) ‘get a subscription to Playboy and spend more time out in the garage?’

Of course I didn’t say any of those things…..but instead merely asked him, “So what do you think you should do?” to which he said, “I dunno man, I guess I need to stop being such a crybaby‘.

I’ve written about the subject of beauty periodically because I believe its an important issue to discuss. The Western World (and other cultures also) is overwhelmed with the topic of beauty, looks, and appearance. Turn on the television, drive down the street, go for a walk; and you’ll be inundated with advertisements connected to beauty and appearance.

Every culture has always had standards of beauty…but Western Culture has perhaps taken one of the greatest leaps in the way we try and force feed a particular standard upon everyone through the power of the media and advertisements;

—) women must be tall, thin, and have perfect skin like a goddess

—) men must be tall, tan, muscular, and handsome

But how many men and women really fit the Hollywood commercialized ideal of beauty? I suspect the number is very low……In fact, whenever I see pictures of models and celebrities without makeup they look surprisingly just like you and me.

Until we realize that the images we see in the movies and on television are simply make-believe; that they are nothing more than people covered with makeup……we are going to continue to have this troubling standard of unreachable beauty.

time for another coffee,