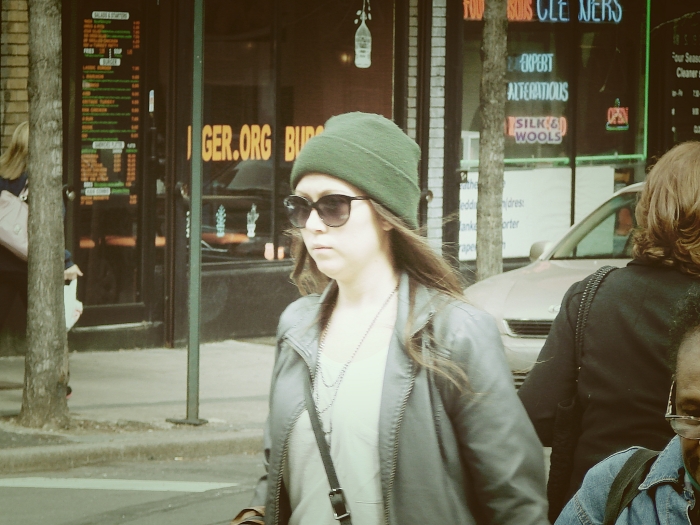 This past weekend I was sitting at a coffee shop early in the morning just outside the city of Philadelphia. I’d only been sitting there for five minutes, I hadn’t even had time to plug my laptop cord into the outlet, when I found myself in the middle of a conversation with the dude sitting next to me.

Every coffee shop tends to have at least one coffee shop connoisseur, a regular patron who has a passion for coffee and a massive knowledge on the subject of all things-coffee; and the dude that I was talking to was clearly this particular coffee shop’s resident guru.

Our conversation went so well that when I told him it was time for me to leave in order to meet up with fellow bloggers and readers who were coming to see me in Philadelphia he asked if he could go with me, to which of course I obliged.

It was as we were sitting at La Columbe in Philadelphia and this coffee house guru got to see up close and personal my fellow readers and bloggers who showed up to meet me, people I’d never met before in person having only connected via the Internet, that I could see the wheels in this man’s head turning.

When the last blogger left, the coffee shop guru turned to me and said quite succinctly, “Kenneth, you’ve started a revolution” he said, “I’m amazed that these people came to have coffee with you and have never met you, I can’t believe how they come and are so willing to share their lives and stories with you”

Of course, to be a part of a revolution one must be revolting against something, and I hardly see myself doing much more than sharing a cup of coffee with fellow bloggers and readers and nice conversation. But the more I started thinking about what the coffee guru shared with me….the more I began to wonder if there was truth behind his observation,

For more than a year I’ve been writing articles about the frustrations people have with Western Culture,

—-) Most people simply don’t know their neighbors; we live isolated lives from people who live 20 feet away

—-) Whether you live in the Ukraine, UK, Australia, Canada, or the U.S., people all over the place are frustrated with their governments and politicians who seem to not give a damn about their constituents

While I’m hardly about to say that my little coffee house tour is some kind of revolution, I do realize a sense of irony in what I’m doing; as so many of us have become frustrated with the way Western Culture is moving, I’ve harnessed the positive aspects of the Internet in order to meet and connect with readers and fellow bloggers all over the Western World.

To call what I’m doing a revolution, in my humble opinion, seems to overstate the case; I’m simply meeting up with readers and bloggers all over the Western World to share a cup of a coffee and conversation; I’m a simple coffee house bum. Yet, when I look at the comment section in some of my articles and see nearly a thousand invitations to stay at people’s houses (people I’ve never met outside of the Internet) I start to wonder about what the future holds.

Alison in Philadelphia made a comment that initially I dismissed, but then the more I thought about it the more I began to realize that it’s a dream that would be very easy to realize; “why don’t we rent a bus in 2015 and get a bunch of us bloggers on board for an even bigger national tour!” she said

The Internet is a powerful tool. I’m thankful for it because without the Internet you wouldn’t be reading this article; but as Western Culture moves closer and closer to a society entirely cut off from each other and dependent on social networks, perhaps there will come a time when you and I say that we want something more out of life,

—-) We want to be a part of a culture where the conversations you and I have at coffee has an immediate and positive effect on the government structures around us.

Perhaps what catches me off guard the most is that the concepts I’ve presented in my articles cut across political and religious ideologies; in my four weeks of touring so far I’ve met conservatives and liberals, agnostics and Anglican’s, Eastern Mystics and Christians. The things that bother so many of us resonate in the minds of so many of us.

I’ve had so many incredible moments in Atlanta, Pittsburgh, Chicago, and Philadelphia but one in particular that really stands out happened this past weekend in Philly. A topic came up that two of the people sitting at the table disagreed on, and as I silently watched to see whether it would blow up into a full scale argument; it didn’t. The two people talked calmly and rationally, at various times they both said, “you make a good point” to each other. Now try and see that happen with the people in Washington, DC! Try and get senators and congressmen(women) to sit across from the table and disagree calmly and rationally…..it simply doesn’t happen.

I honestly don’t know what lies ahead of me as I prepare to pull into Madison, Wisconsin this weekend but to say that I’m excited would be an understatement.

Just a few thoughts as I was sipping my…….tea this morning. The vocal stress upon my throat from these travels gave me a sore throat all week so I’m currently drinking green tea with honey to prepare for Wisconsin. If you live in and or near to Madison I would really love for you to join me for a cup of coffee!