Gender Roles & Muslims in the Middle East – An Essay 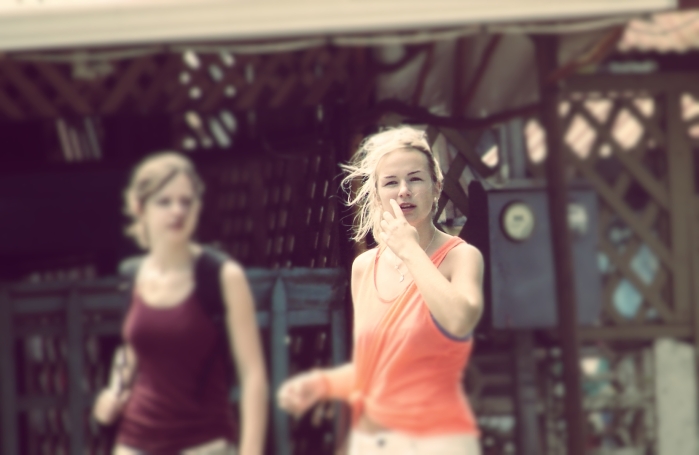 This is an essay I wrote a few years ago…

The Islamic religion is well known for its universal laws of abstinence before marriage, no toleration of alcohol, and other such distinctions. Despite these universal laws that Muslims hold to there are varying beliefs related to gender perspectives which change from one society to the next. The well known migration of Muslim families to Western societies such as Great Britain and the United States has played a key role in the differing attitudes Muslims have toward gender relations as they have become more integrated in cultures outside of the Middle East (Read, 2003). A strong sense of male dominated leadership is still prevalent within the majority of Muslim families throughout the world but this sense of gender equality is slowly disappearing as both the global economy and greater levels of tourism have begun to challenge those traditionally held Islamic views of gender (Naber, 1998).

In this paper I will discuss various issues related to gender perspectives within predominantly Islamic countries in the Middle East as well as among Muslim families in the United States of America.

According to Linda Brannon (2007) in the book Gender: Psychological Perspectives, Muslim countries have “longstanding traditions of unquestioned male authority over the family” (p. 254). However, countries such as Morocco and South Africa have slowly but steadily began to change political policies “giving women more rights in marriage” (Brannon, 2007, p. 254). In the article “Tracing our research trajectories: the study of gender in Muslim societies” published by JMEWS: Journal of Middle East Women’s Studies, author Azza Basarudin (2008) cites one viewpoint that it has been tourism in Morocco and South Africa which has led to greater freedoms for women (para. 21). Thus, as women from non-Muslim cultures have visited and vacationed in those countries, their presence was a positive motivating factor in bringing a greater degree of gender equality for the Muslim women. Therefore, one of the central issues related to gender perspectives within Islamic cultures is the fact that gender views experience change as cultures collide.

In the article “Family and Gender Among American Muslims: Issues Facing Middle Eastern Immigrants and Their Descendents” published by the journal Gender & Society, author Nadine Naber (1998) discusses Islamic society in Egypt and how the family is considered the very center of society and that children are the main focus of women within the culture (para. 5). The concept of women’s lives being mainly concerned with raising children is largely considered to be an old way of thinking in the United States as well as a way of repressing women’s rights. However, in many Islamic cultures such as Egypt, women do not necessarily think in terms of being repressed because they have to raise children but as a way of life. Naber (1998) writes “males and females occupy distinct roles within a patriarchal system based on age and gender. Women are caretakers, and men are providers”.

This view of men as sole providers and women as domestic homemakers has striking similarities to early U.S. expectations of gender roles and is most likely connected to the similarities between Judeo-Christian religious beliefs and Islam. It is well known that both religions find a commonality in the teachings of the Old Testament and the patriarch Abraham and that the Old Testament places a strong emphasis on men being the head of the household, whereas women occupy a more subservient role.

Professor Fawzia Afzal-Khan (1997), who was raised in a Muslim family in Pakistan, suggests that Americans on average associate the phrase, “Muslim woman” with the terms; “weak, subservient, passive, abused” (para. 8). This would concur with the major strides women in America have made over the past century via the women’s rights movement; cultures which do not give complete equality to women would generally be viewed negatively by Americans.

Of course the most significant source of gender identity development among children raised in Muslim families is the very structure of the household as was previously discussed, which places a heavy emphasis on male domination and female subservience. However, while some Islamic cultures still hold to those male dominated views, other Islamic cultures have experienced tremendous change;

In the United States, Islamic views of masculinity and femininity often depend on whether the Muslim family has migrated to the country or are second generation citizens. In the article “The sources of gender role attitudes among Christian and Muslim Arab-American women” published by The Journal Sociology of Religion, author Jen’nan Ghazal Read (2003) discusses the results of her extensive study on the subject of gender and Arab-American women. Read (2003) suggests that although Islamic women in America are considered to be more traditional and more repressed than non-Islamic female Americans, that among Islamic women born in America “the influence of Muslim affiliation on gender traditionalism disappears” (para. 27).  Thus, young girls who are raised by Muslim parents born in the United States are more likely to experience the same type of upbringing as non-Muslim Americans.

Although Muslims in Indonesia do not practice the exact same Western ideals as second generation Muslim-Americans, they do however have many notable differences from their Middle Eastern brothers and sisters. In the article “The new Muslim romance: changing patterns of courtship and marriage among educated Japanese Youth” published by The Journal of Southeast Asian Studies, author Nancy Smith-Hefner (2005) cites 1975 as a pivotal moment for Asian Muslims when Indonesia passed laws that encouraged women to participate in the workplace and that instituted “the principle that the consent of both parties to marriage must be obtained” (para. 2). No longer could women be forced into a marriage they wanted no part of.

While Islamic women in many countries have experienced a greater freedom in regards to higher education, the education of men is often still valued over that of women.

Indonesia, which is nearly 90 % Muslim, has a more positive view of women and education than other Islamic countries, but when money is tight families tend to value the education of their son’s over their daughters (Smith-Hefner, 2005, para. 3).

In Iran more Muslim women are attending colleges and universities than ever before (Shavarini, 2005, para. 1).

In Saudia Arabia where the interaction of non-married Islamic men and women is still forbidden, the country has allowed an experimental educational program which enables female students to take classes via the Internet with a male professor (Del Castillo, 2003, para. 3).

An interesting progression in gender relations within Indonesia is the growing percentage of teenage girls who are permitted to have boyfriends, something that would have been severely frowned upon (if not condemned) in prior decades (Smith-Hefner, 2005, para. 37). Sexual promiscuity and extra-marital affairs is considered to be a major problem in Indonesia to which some proponents are advocating polygamy as a way of circumventing what is considered to be a major moral crisis (Smith-Hefner, 2005, para. 46).

Within Islamic culture, marriage is viewed as the joining of two families and therefore romantic relationships between single men and women are limited to other Muslims (Dhami & Sheikh, 2000, para. 7). So highly held is the concept of keeping a specific Islamic identity is the practice of consanguinity, Dhami and Sheikh (2000) write, “Among Pakistani Muslims, current estimates are that some 75% of couples are in a consanguineous relationship, and approximately 50% are married to first cousins” (para. 8).

While many Western ideas of gender perspectives have been adopted by Indonesians, one element of Indonesian culture that is actually moving away from Western ideals is that of dress. Many Indonesian women are choosing to wear more traditional forms of Islamic clothes (such as the veil) as opposed to Western trends (Smith-Hefner, 2005, para. 41).

Perhaps one of the most common misunderstandings Americans have of Muslims is related to the veil or hijab (modern headscarf), in the article “Clothes, Culture, and Context: female dress in Kuwait” published by the Journal Fashion Theory, author Marjorie Kelly (2010) explains that while Muslim women in Kuwait wear the hijab in public, “At private, same-sex, or family gatherings, women remove their abayas to reveal anything from shorts and jeans to formal gowns” (para. 5). Thus, at home Kuwait women often dress just as casually as American women, the main difference being that casual dress (such as jeans or shorts) is considered improper in public. It was scarcely less than a generation ago that the average American man would not even think of attending a ball game without wearing a tie so this author contends that those people overly critical of Islamic dress need to remember our society has only recently relaxed our own view of proper public dress codes.

Professor Afzal-Khan (1997) reviewed various literature from around the world and demonstrated the differences in how the subject of the veil, worn by Islamic women, is dealt with in various literature from around the world: she explains that some authors see the veil as a way of “empowering” Muslim women, whereas others view it as a form of restriction (para. 23). This would suggest that Islamic families which are deeply devoted to the traditions and religion of Islam do not view distinctions in dress (such as women having to wear a veil) as a way of demeaning the female gender but as a way in which women are able to worship their deity differently than men. This is not meant to discredit the piety of Muslims who view the veil as a form of restriction but to show that within those Islamic cultures which enforce the wearing of a veil, there are very real gender differences in how men and women worship.

In conclusion, gender perspectives in Muslim families are almost entirely dependent upon the particular country the Muslim family lives in. In the United States, second generation Muslim women live almost identical lives to non-Muslim American women, whereas Muslim women in parts of Asia and the Middle East are still viewed as subservient to men. Although abstinence before marriage, and sexual fidelity are one constant that is taught among Muslim families no matter the culture; the actual practice of these are often dependent upon socio-culture factors.