~ “We are social creatures”

I was thinking about that statement of mine quite a bit last night as I sat downtown sipping my coffee, watching people walk by.

One of the things that fascinates me is how the drive within us to connect with others is so strong that it only takes the smallest little thing to connect us….

A man with a dog sat down across from me for 10 minutes and in that short amount of time he had at least a half-dozen people stop to pet the dog….and to say hello to him. 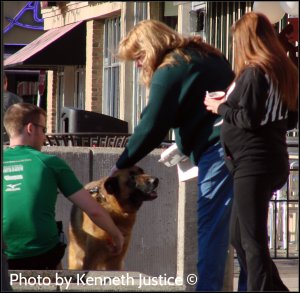 Now on the one hand I realize that people love dogs…..maybe you didn’t hear me, people LOVE dogs….

Yet there’s another element at work…..I believe dogs are a quick way to bridge the gap between strangers…..because we are dying to talk-to-each other.For some reason dogs have become that little thing-in-between.

We enjoy talking to each other

Music is another way we bridge the gap in-between….

Actually, music seems to be one of the most powerful ways we connect as people.

You can go to a concert and not even be able to understand the language of the musicians or singers and still feel connected to their production….look at the success of the hit Gangnam Style, who would of ever thought that an entirely Korean sung pop-song would hit the top-of-the-charts in the United States and other Western countries?

Had I walked downtown last night and there had been nobody out I might of grabbed my coffee and went home…..

Because there were musicians out, people walking, dogs, bicyclists…..

A downtown with no people is nothing more than a bunch of a buildings….it really isn’t something we think of as ‘downtown’ is it?

We have a term for downtown’s with no people;  a Ghost Town

But its really easy to fall into routines….

It’s easy to find ourselves spending a lot of time at home….in front of the television, playing video games, or in front of our laptop bringing our work home with us….

Have you ever realized that the stranger sitting across from you at coffee might be going through a divorce? Perhaps their boyfriend just broke up with them and they feel like their whole world is crushed.

The kid sitting alone on the park bench might have been bullied earlier in the day…..maybe they don’t have any friends at school and they feel like their life totally sucks…..

If you have stepped outside of your house, the statistical chances that you are around people who are hurting, lonely, sad, depressed, or going through some type of emotionally charged situation is very high.

Remember, in the United States, nearly 50% of Americans are on some type of prescription medication…..we are a country filled with people who going through s**t.

Yesterday, one of the comments stood out to me,

<Mark> writes, “I think social media has increased our need for belonging. Honestly, I think this has many negative manifestations – but it also allows people to connect in more amazing ways than ever before”

This theme has been coming up quite a bit lately; people feeling that social media is leaving them hanging…..leaving them feeling like they need to find a different way to connect with others.

So as our world continues to experience massive change due to things like social networks……I believe it becomes all the more essential for us to be willing to say hello to each other.

In my writings I ask a lot of questions…..because they are questions I am thinking about constantly……

This is one of those subjects that I really believe is important to question: are we reaching out to those around us enough?

Or are we being swallowed up by social networking and the busyness of our career’s and unable to stop and say hello?

Blogging is one way we as strangers can stop and say hello……I really like that about blogging…..if I was only on Facebook I would not have met any of the people I have met through blogging……

Yet, like other things on the Internet….blogging has it’s own limitations….blogging doesn’t allow me to reach out and hug someone who is crying…..

Last week I was sitting at coffee and I noticed a tear fall down the cheek of a young woman sitting near me, I gently put a hand on her shoulder and said, “The best is yet to come”…..she smiled and said, “Thank you….I’m just having a rough day but I know it won’t be like this forever”….

But…have we become to closed off as people? Have our own issues and our own problems become to important that we can’t stop and say hello to a stranger?

Like many other people who have shared concerns about where our culture is headed…..I too am concerned….I’m concerned that in our quest for newer technology the simple act of striking up a conversation with a stranger is being lost……

However, I don’t want to forget the end of Mark’s quote, “but  it also allows people to connect in more amazing ways than ever before”

That is the key isn’t it? To not focus too much time on the negative elements of social networking…but to instead embrace the positive ways we can connect…right?

And that then opens the door to more questions?

How can we connect more effectively when we are just so tired?

When we’re so busy?

When we have so little time?

When we are nervous to open up to strangers?

When we aren’t sure where to meet people?

When we’ve been hurt by people and the wounds are still hurting?

More questions….and I don’t have a lot of answers…..

For now I think I’ll have another cup of coffee,